For years Acea has been turning Roman nights into an unforgettable experience, on the part of both those visiting the Eternal City and those whose everyday life takes place there; the Capital’s artistic lighting plan continued again in 2017, intensifying and enhancing the uniqueness of each monument via a sustainable approach providing for the replacement of old lights with led lamps.

Beauty is a responsibility and needs to be nurtured. With the passion of a tailor making clothes to measure, Acea looks after the artistic lighting of the Capital, emphasising the majesty of its monuments with systems designed and constructed to exalt each single element.

Roman nights, with buildings, monuments and fountains enhanced by a modern concept of artistic led lighting, are nights of poetry. 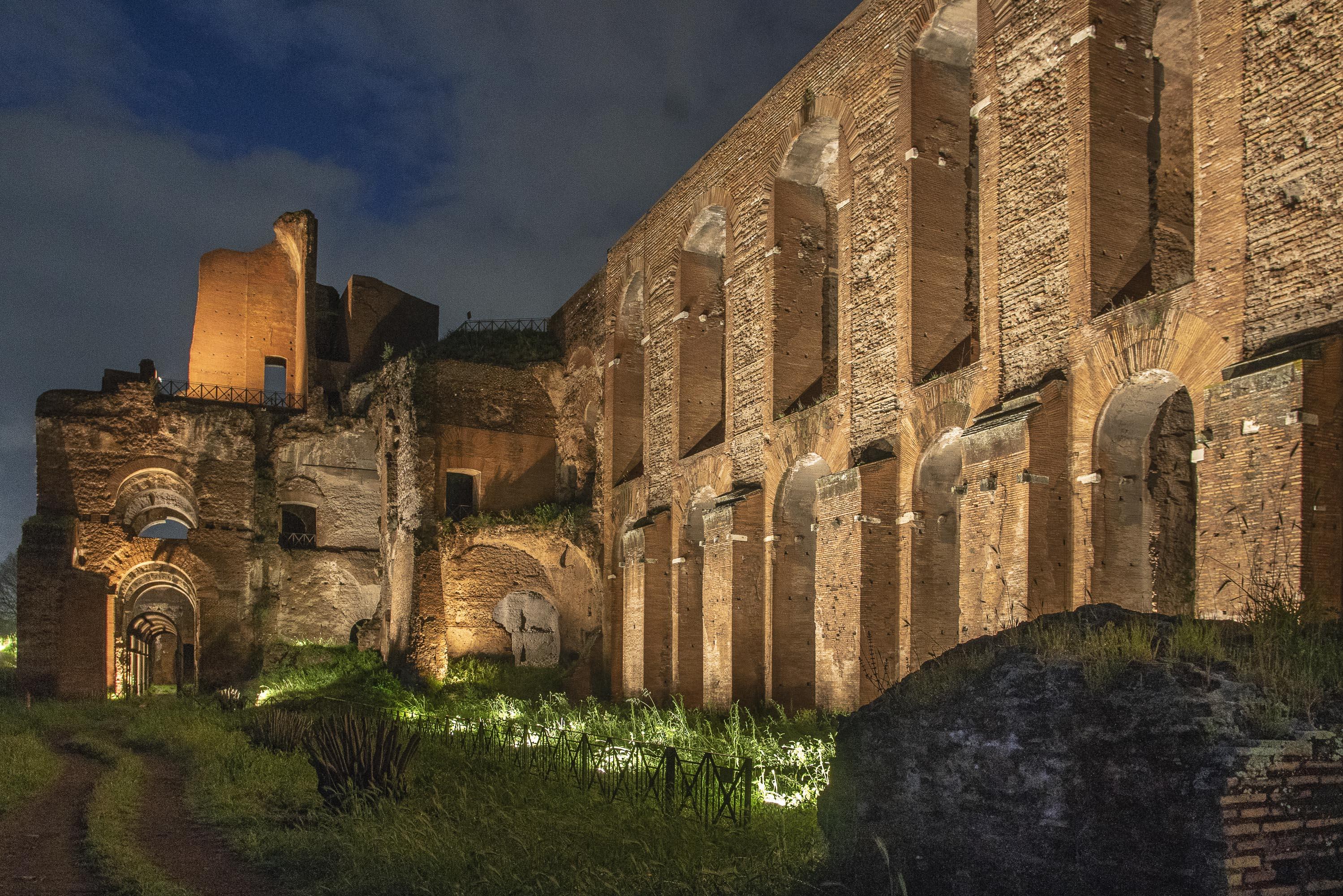 During 2017, the redesign of public lighting involved Piazza Navona, the Palatine Hill, the Pyramid of Cestius, Porta San Paolo and the Basilica of Saint Mark the Evangelist at the Campidoglio.

The innovation of the Capital’s artistic lighting system exalts the beauty of Rome, while increasing its sustainability: by using LED technology a notable energy saving can be achieved.

Illumination of the Palatine: an intervention with a strong visual impact

A magical night adding renewed splendour to an eternal emotion: on 31 December 2017, Rome celebrated the New Year with the magnificence of the Palatine archaeological area floodlit again after 13 years.

The new artistic lighting system, donated to the town by Acea, is a permanent feature and will allow everyone a breathtaking view of a site characterised by extraordinary beauty and historical value.

The entire side of the Palatine facing the Circus Maximus and all the interior archaeological buildings have been enriched by the installation of 98 lamps with different colour temperatures, so as to intensify – even at night-time – the true colour rendering of the compositional materials.

Alongside the strong visual and emotional impact, the upgrade and restoration of lighting as regards the Domus Severiana, Stadium, Domus Augustana, Domus Flavia and Paedagogium have achieved another objective: the use of next generation LED devices enabling a 70% energy saving with respect to the previous system.

Illuminating an area means to write the experience of all potential visitors. The artistic lighting intervention conceived together with the municipality of Rome for Piazza Navona – thanks to the various tonalities of light chosen – draws attention to the complexity and architectural wealth of the location, without overlooking the functional enhancement of the existing lighting system.

“Architecture is nothing without light.”

In particular, the colour contrast created by illuminating the Fountain of the Four Rivers highlights the different materials that give life to the monument.

Pyramid of Cestius and Porta San Paolo: the importance of context

The lighting of the Pyramid of Cestius has been modernised and enhanced via an intervention that ensures an almost 50% reduction in consumption.

New lights – by redesigning the previous lighting system – also for the Pyramid of Cestius and Porta San Paolo, with a project proposed and carried out by Acea in agreement with MIBACT and the Municipality of Rome.

More than 36 metres high and with a square base of approximately 30 metres per side, the Pyramid of Cestius is now floodlit by way of a suggestive LED bar system with different colour temperatures to obtain a uniform rendering over the entire monument. To ensure that the two inscriptions on the Pyramid are perfectly legible, a grazed lighting system was used. Installed capacity totals 1480 W compared to the previous system’s 3600 W 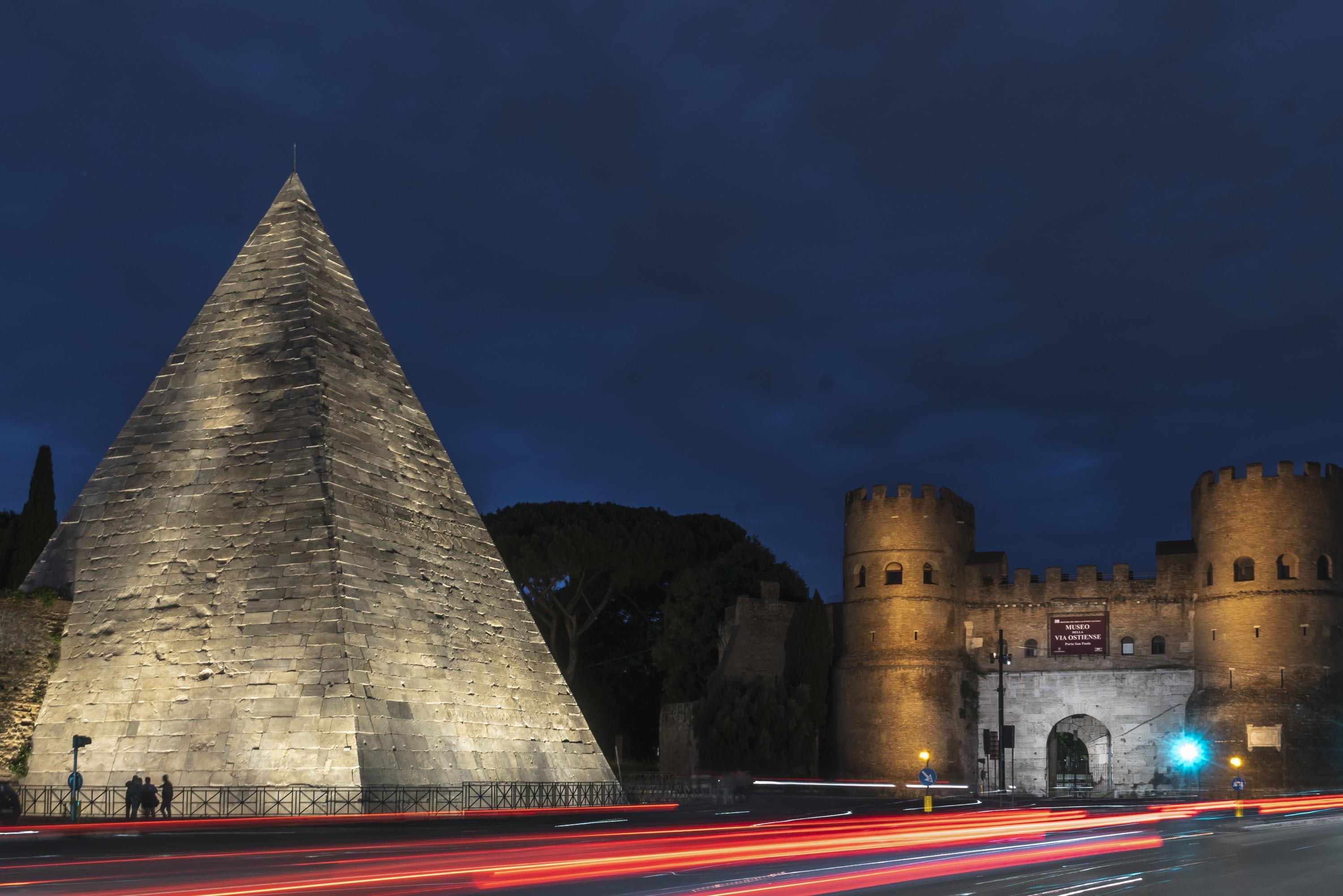 In order to correctly contextualise the monument area, the lighting for Porta San Paolo, located close to the Pyramid of Cestius, was modernised using LED technology. The Towers, the Entrance Gate and the interior were illuminated using various colour temperatures, according to the architectural materials.

The Basilica of Saint Mark the Evangelist at the Campidoglio: embroidery of lights

An evocative place steeped in history, Piazza Venezia must inevitably be included in every Rome itinerary. It was in this location that Acea, in agreement with MIBACT and the Municipality of Rome, realised the lighting system of the Basilica of Saint Mark the Evangelist at the Campidoglio.

The intervention envisaged the illumination of the Façade, the Portico and the upper Loggia. The Basilica, which was first built in 336 A.D., underwent several restorations up until the baroque period and comprises different styles of architecture. All these treasures are now enhanced with a system that includes 16 projectors, also making use of reflected light to draw attention to the monument’s many features.

The passion for beauty gives rise to targeted interventions: everyone must be able to enjoy the cultural wealth of Rome. Even at night-time.

The bas-relief of Saint Mark on the tile above the entrance gate, for example, is floodlit by two devices placed diagonally with respect to the relief, in order to avoid flattening the figures. As regards the upper Loggia, from the Renaissance period, attention has been drawn to the surrounding pictorial frame and the ceiling with wooden beams, using four illuminating devices, with another two directed towards the floor, where museum exhibits are often placed.